What does the price of my cruise include?

The price of your cruise vacation includes:


The following services are not included in the cruise price:

All prices are per-person, based on a double occupancy of the stateroom and are quoted in U.S. Dollars unless otherwise noted. The cruise fares quoted also do not include any applicable government taxes, fees, or surcharges that may be assessed by any governmental agencies. Such assessment is subject to change without notice at any time whether or not you have a confirmed booking under deposit or if you have made a final payment.

What is included in the price of my cruisetour?

The price of your cruise vacation includes:


All prices are quoted in U.S. dollars unless otherwise noted, on a per-person basis and based on double occupancy of the stateroom.

The cruise/cruisetour vacation price does not include: air transportation (except as noted), transfers (except as noted), optional Shore Excursions, meals and accommodations ashore (except as noted), certain beverages, casino gambling, photographs, gratuities, telephone calls, specialty restaurants onboard certain vessels, purchases from the ship stores, or items of a personal nature such as medical services, laundry, massages, spa treatments, hair styling or manicures. Some of these items may be purchased separately. Food and beverages are not included on Alaska Cruisetours. On the Canadian Rockies Cruisetours, food is included as noted in the cruisetour itinerary. For cruisetours that include air travel, airfare is included in the package.

The Company retains the right, on rare occasions, to raise the minimum age to sail unaccompanied on any sailing when local laws require or permit such a modification.

For voyages originating in North America:

No Guest younger than the age twenty-one (21) will be assigned to a stateroom unless accompanied in the same stateroom by an adult twenty-one (21) years old or older. A guest’s age is established upon the first date of sailing.

This age limit will be waived for children sailing with their parents or guardians in connecting staterooms; for underage married couples; and for active duty members of the United States or Canadian military.

Certain other restrictions and conditions will apply; such as compliance with the age twenty-one (21) alcohol policy, and proof of marriage for underage couples or proof of active duty military status required.

Please be aware that guests travelling with a young infant that does not meet the infant policy will be denied boarding. No refunds or other compensation shall be due from the cruise line to anyone as a result of the denial of boarding to an underage infant or other accompanying guests.

Royal Caribbean International reserves the right to ask for proof of age. Royal Caribbean International’s age policy for gambling and consumption of alcoholic beverages is as follows: Please note: An individual’s age on the date of sailing determines his or her status for their cruise vacation. However, if a guest celebrates their 21st birthday during the cruise, the guest may thereafter ask the Guest Services Manager to modify ship’s records to permit their consumption of alcohol during the remainder of the cruise. The guest will be required to appear at Guest Services with his or her parent or guardian and to present a government issued form of identification to establish that the guest’s 21st birthday was celebrated during the cruise.

Do you work in the Technology industry and need to get away and take a break? Ready to recharge, rejuvenate in new surroundings and be inspired by other like minds? Then, you can’t miss the 4th annual Tech Cruise!

Tech Cruise is a 7 night tech networking cruise onboard the Royal Caribbean ‘Grandeur of the Seas’ Cruise Ship, departing Baltimore, Florida, sailing to King's Wharf (Bermuda) and back.

With plenty of networking opportunities in a relaxed environment, it is the perfect place to build a professional network, find business partners, generate new ideas, and learn. In addition to networking opportunities, there are also 3 optional Events on the Days at Sea if you would like to get in some learning during the cruise, including DigiMarCon At Sea, Sales Summit At Sea and TECHSPO At Sea.

Take advantage of our super saver registration rates and secure your cabin early and be sure to bring your partner/family along for a vacation. Hurry, this cruise will sell out weeks before we depart as it did last time. For more details visit https://techcruise.co. 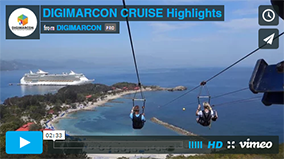 REGISTER NOW TO SAVE YOUR SEAT
To ensure attendees get the full benefit of an intimate cruise,
we are only offering a limited number of seats.
Get My Seat Now!
AS FEATURED IN:

Tech Cruise is a 7 night tech networking cruise held from May 23rd to 28th, 2020 onboard the Royal Caribbean ‘Oasis of the Seas’ Cruise Ship, departing Orlando (Port Canaveral), Florida and sails to Philipsburg (St. Maarten), San Juan (Puerto Rico) and Labadee (Haiti) and back.

With plenty of networking opportunities in a relaxed environment, it is the perfect place to build a professional network, find business partners, generate new ideas, and learn. In addition to networking opportunities, there are also optional Events on the Days at Sea if you would like to get in some learning during the cruise, including DigiMarCon At Sea and TECHSPO At Sea.